Multinational companies like Apple hold the country to ransom by threatening job losses if they are forced to pay a fare share in taxes on their massive profits.

Tim Cook being presented an award by the Taoiseach today sums up the mentality of the political establishment. This is the head of a company which has avoided €14.3 billion in tax in Ireland according to the European Commission.

Instead of pursuing him for the tax his company owes, the Irish government is spending €7.5 million in public money on a court case to ensure he doesn’t have to pay it, and now are giving him an award! It seems the political establishment are suffering from a sort of ‘Stockholm syndrome’! 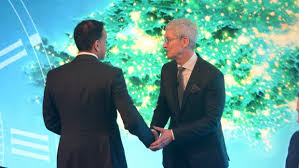 Contrast this with Varadkar’s ‘Welfare cheats cheat us all’ campaign built on figures that were exaggerated by a magnitude of ten! If someone on social welfare got an extra €100, they would be pursued vigorously. Yet Tim Cook is rewarded for robbing us of €14.3billion - money that could be used to build public housing, invest in renewable energy, and in building a National Health Service.

It is no wonder that the latest Oxfam report indicates that global inequality has deepened even further. Just 2,153 billionaires have more wealth than 60% of the world’s population. Meanwhile in an Ireland of homelessness, trolley crises and attacks on pensioners, we have the fifth highest number of billionaires per capita. These stories are directly linked. The race to the bottom in terms of corporate and wealth taxation, which Ireland has been a part of driving, is resulting in this inequality. A socialist alternative - based on democratic public ownership and planning for people’s needs and our planet - is desperately needed.